Older Americans become victims of crimes that they  are not prepared to protect themselves from.  They understand locks on doors but they don’t understand the dangers of answering the phone or the door when someone knocks. 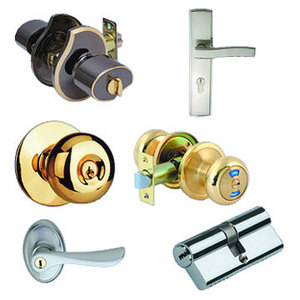 Some of my elderly neighbors keep the front screen locked, and beyond that door is a porch door, also locked.  Beyond the porch door is the interior door to the home, that sometimes has multiple locks.  The doors are kept locked.

Fewer violent crimes are committed against older Americans than against any other group but they are more susceptible to certain types of crime than any other group.

There is some consumer information about crimes against seniors on the MN department of commerce web site, and I found some information on the FBI’s web site, but I don’t know how many older Americans are getting this information. The Minnesota site has a fairly comprehensive guide that covers financial planning and outlines common scams.

If you have friends, parents or neighbors who are older Americans, read up on crimes against seniors and don’t be afraid to talk with them about it. Educate yourself and teach someone else. It may be  a challenge to get past their spam blockers, caller I.D.’s and locks, but they need to know that there are people out there who can trick them out of their home, no matter how many locks it has. 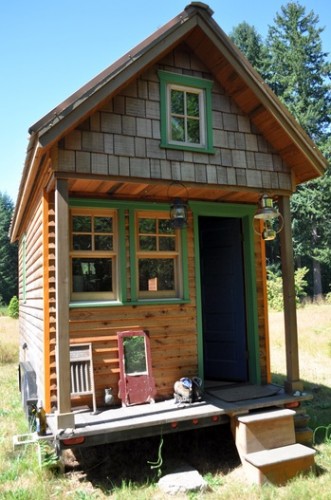 These dwellings are much less expensive than a more standard size house. The idea is to spend less on housing and have fewer belongings and more time to spend doing something besides working for money and accumulating stuff that requires space. They also cost less to heat and cool and to insure. They require less maintenance and less furniture.

On average people who own tiny houses have money in the bank and many of the have no mortgage.

Today is isn’t at all unusual for first time home buyers to be looking for at least 2000 square feet and the averages for new construction, at least in the burbs is closer to 2400 square feet. They don’t have enough stuff to fill it up so they start acquiring and accumulating.

Some studies have suggested that families who live in tighter quarters get along better because they spend more time together. Yet the most common reason for wanting a bigger house is to have room for children.

Many of the tiny houses are mobile and can be moved to a lot. Of course in the city you mostly can’t do that but in some parts of the country the demand for tiny houses is changing local zoning laws, but in St. Paul laws are slow to change. Having a tiny house far away from the city isn’t as sustainable as having it in the city close to amenities and jobs and perhaps using public transportation.

I think there is a market for tiny condos in downtown St. Paul. There are spaces that are less than 500 square feet. They are never marketed as tiny condos but they should be. Most have full sized kitchens which really seems like a waste of space. Why not have a galley kitchen? I like the idea of a Murphy bed too or a sleeper sofa that can double as a place to sit.

When something comes on the market in the area that is small I usually go see it. We all have the idea of a dream house, I dream small.

There are numerous websites dedicated to tiny houses and they can be built from kits that can be ordered online but there aren’t any kits for tiny condos. 🙂 We are not seeing micro apartments yet but they are sure to travel from the coasts and make it inland in the next decade or so and eventually maybe we will be able to put some tiny houses on city lots.

Right now in 2017 we have a shortage of affordable housing. Smaller housing might be the answer.

While it is true that the baby boom generation is no longer the largest generation it is also true that the whole world is aging and at some point in the next three years or so for the first time in human history there will be more 65 year olds than there are five year olds.

We really have no way of knowing if this trend will some day be reversed but for now we need to work with what we have.

As the daughter of elderly parents I wonder if our housing will be adequate as we age. Our current system of providing care for the elderly doesn’t make a lot of sense either. The U.S. isn’t as old as some other countries mostly because of immigration but it looks like that could change in the near future too.

From a business point of view I think now is a great time to develop products and services for older American’s and for the very old. Elders could benefit from the use of more technology.  Last year I bought my dad an Amazon echo. He can now do all sorts of things for himself using voice commands.

I see old people every day and all of the time.

Over the years I have sold three homes for my family.  One of the challenges of selling a home that is or was owned and lived in by an elderly person is making it look as appealing as possible to younger home buyers. Sometimes the homes look as if time stood still.

The first hurdle can be getting the owners to give up some decorating choices they made long ago. My mom doesn’t know that I had the wallpaper boarder removed from the kitchen repainted or she would be upset about it.  Often “grandmas” house is in good repair and is an excellent opportunity for first time home buyers to fix some of the cosmetics and build equity.

As a seller I don’t want to put any more money into the home than I have to. Here are some of the things I did that were fairly inexpensive that helped sell grandma’s house:

3. Replacing old drapes with sheers in shades of white.

4.  Replacing any window shade or blind that was anything other than white or just remove them.

The list isn’t really prioritized by importance but it is  in order of how much the project is likely to cost. It is important to have budget and to stick with it. If the improvement won’t help sell the home faster or for more money it isn’t worth doing. it is the smallest improvements that give the greatest payback. Cleaning and painting have the highest ROI. Removing a wall paper boarder can have a tremendous impact.

It is also a good idea to have furnace or boiler serviced and have any repairs done that are needed. As a rule anything that leaks should be fixed and there are usually other obvious repairs too.  Sometimes small maintenance issues result in low offers. 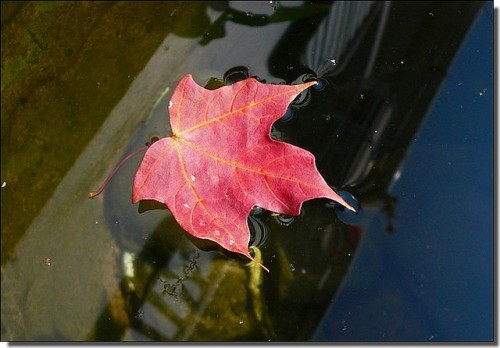 Deciding if we should stay put in our houses for awhile has a lot to do with money and with health and where we live and how large our houses are and how much we owe on them.

Some of my older friends have retired and taken part time jobs. They are staying put. Their homes are not huge, they live in the city where there are lots of amenities and services, and part time jobs and their homes are paid for. Others have large homes in the burbs and would like less house and more travel and plan to move or “downsize”.

Others were almost wiped out by the recession after losing jobs and surviving on money saved for retirement. They are working and plan to continue into their 70’s.

A few of my friends have health problems or “issues” as they say and are going to stop working and retire early. My parents have been retired for 25 years. One of my grandfathers died a few weeks after retirement. For his generation that was more the norm, and may continue to be the norm for those who spent their lives working in low wage jobs.

The good news is that nobody has to move just because they are old but many can move if they want to. Many will choose to age in place. There is no one size fits all housing or lifestyle solution for the baby boomer generation.

Occasionally in my business I meet with people who may have lost the ability to make good decisions, or any decision at all. It isn’t my place to judge anyone else’s decisions but if I see someone who is having trouble I try to help by getting others involved. I have an immediate family member who suffers from Alzheimer’s disease and I saw first hand how the person’s ability to make decisions was affected and slowly diminished by the disease and I recognize the signs and symptoms.

This is from the Alzheimer’s web site about symptoms of the disease:

I take care not to assume that someone who is older and who forgets something has Alzheimer’s and I favor the idea of aging in place. Sometimes getting more services is a better option than moving out.

There are times when someone wants me to meet with me and it is clear to me that they want help making a decision. Sometimes they want to move but have trouble processing the information I give them about available housing and as a result they don’t take any action.

The way I usually handle the situation is I ask the elder if they have a friend or relative that they trust and can bounce ideas off of. I try to get then to get that person involved. I also refer people to Senior Linkage Line where they can get professional guidance on housing options 1-800-333-2433.  The service is free and the people who provide it are not trying to sell anything and they are not getting paid for referrals. There are various businesses that relentlessly pursue elders as potential clients.

I found training for Alzheimer’s friendly businesses. I like the idea of businesses learning how to treat people with Alzheimer’s with respect, and it really is all about respect. The course is geared toward the retail and hospitality industries and is pretty lightweight but I think it is an excellent way to start a conversation and build awareness.  As our population continues to age there will be more people with various forms of dementia because the longer we live the greater our risk for dementia. See some facts about Alzheimer’s

Alzheimer’s is not curable and the fatality rate is 100%. 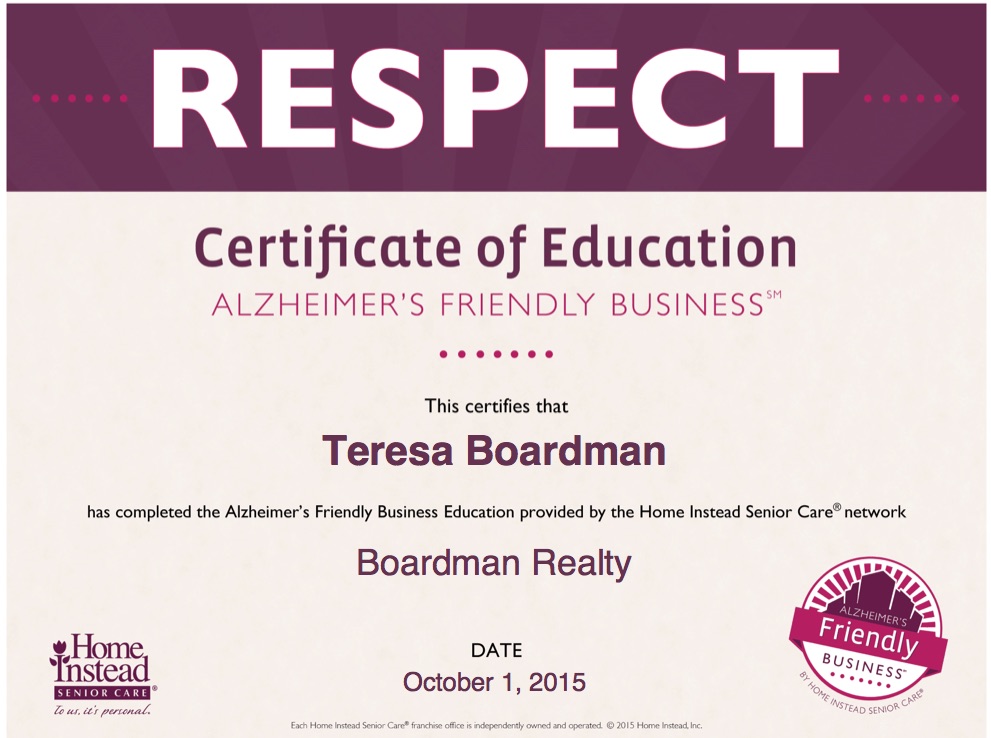