It isn’t unusual to find an entire house where every room has been painted yellow. It isn’t for everyone but it is a popular color especially in older homes. Bright yellow brings joy and energy into a room. Mutes yellows can make a room feel cozier and gold can make a room look elegant. Mustard yellow is a current decorating trend.

Walls that are yellowish-green or umber or some shades of red can also be hard to photograph. I like to use the RAW camera format so that I can go back and change the white balance if needed.  I guess I just gave away a trade secret. 🙂  Using auto white balance rarely works out with yellow walls.

Yellow exteriors are easy and even fun to photograph especially with a blue sky or fall leaves in the background. These days I see a lot of yellow paired with shades of gray which is less of a challenge for interior lighting.

There is more to photography than pointing an iPhone at something but sometimes iPhone photography works.

Right next to downtown St. Paul in an area we used to call the “seam”  in-between Downtown and the West 7th neighborhood there is a new apartment building, the Irvine Exchange apartments. The piece of land is a traffic island with busy streets on all sides. The older building in the foreground in Panama Flats which is an old row house converted into condos.

For a city to grow and thrive there has to be a mix of old and new. The new apartments rent for up to a little over 6K a month. It looks like the more affordable units were rented out right away. $1,126 for 367 square feet which would easily fit inside of the first floor of my home.

There has been a lot of development in the West 7th area near downtown since the great recession. There are new hotels and more places that serve beer.

If you are looking for a place to go that is close to the Twin cities consider visiting Taylors Falls. We went there a couple of weeks ago and enjoyed walking through pothole park (Interstate Park) and we on the paddle boat ride on the St. Croix River.

Taylors Falls is especially beautiful in the fall and is one of my favorite place to go and take pictures of fall colors . . . not that we need to think about fall in the middle of summer.

Minnesota is a beautiful state.

The first picture was taken in 2016 when the City of St. Paul owned the property. They didn’t own it as an investment but bought it to keep it from being raised.  The second picture was taken last week and shows how the 1850’s building looks after undergoing renovations with the help of a $600,000 public subsidy with some strings attached that the units must be used as affordable rentals for the next 15 years.

Renovations were done by private owners in a partnership with Historic St. Paul preservation group. The building was open last spring for the home tour.

It is Friday and Fridays are for fun. I have a couple of colorful pictures to share.

Rice Park in downtown St. Paul was closed for a year and a half or so for renovations. The park is the center of many events throughout the year. It just wasn’t the same having Winter Carnival events in Kellogg Plaza Park.

The park has a long history, it is 170 years old and St. Paul sprouted up around it. It is seven years older than Central Park in New York City. Before it became a park, Rice Park was used as an open space to dry laundry and graze animals. The land was eventually made into a “public square” in 1849 by John R. Irvine, a territorial pioneer and Henry M. Rice, territorial delegate and United States Senator. In May of 1914, a Woman suffrage rally was held in the park.

The revitalized park doesn’t look all that different, and this isn’t the first time it has been renovated. The landscaping has been changed, and the lighting has been improved. There are fewer trees and more concrete. The fountain is still in place. Statues were moved around but they are all still there.

My memories of Rice Park go way back. During summer vacations we used to ride the bus downtown and go to the Library, which is across the street from Rice Park. We would check out some books and sometimes sit in the park and read them.

Part of what makes the park so special is the Saint Paul Public Library on one side and the Landmark Center on the other.

I looked through my pictures of the park and most of them were taken in winter during the winter carnival. Last week I got some new pictures just before the park was filled with tents and people ready to add to the history of the park.

Go to StPaul.gov for more information about the recent renovations at the park and future events.  – Click on the pictures for a larger view. 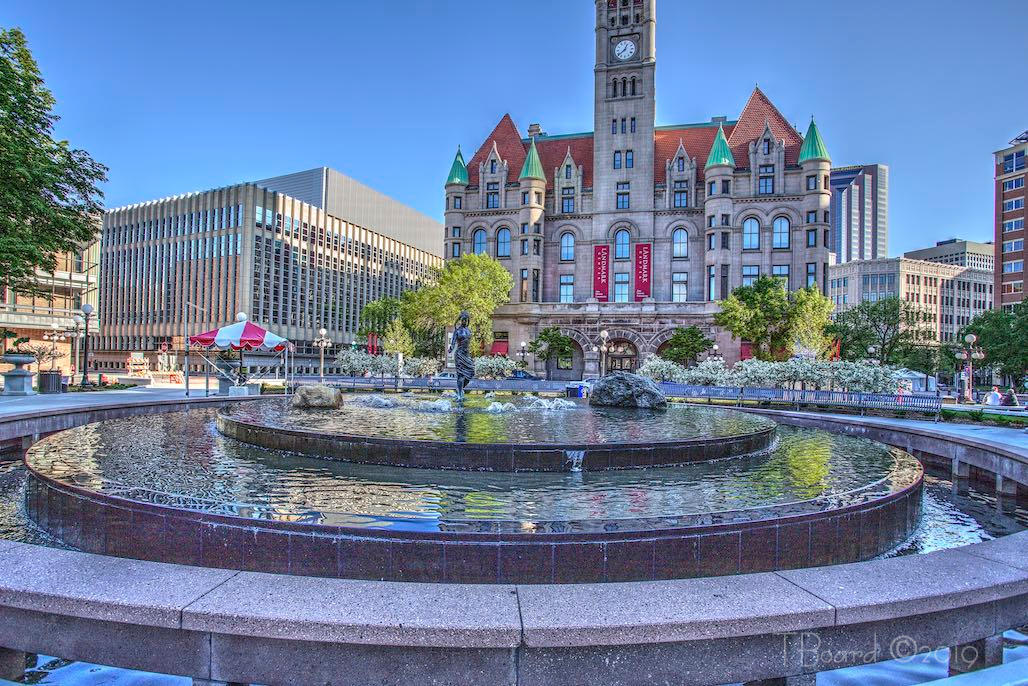 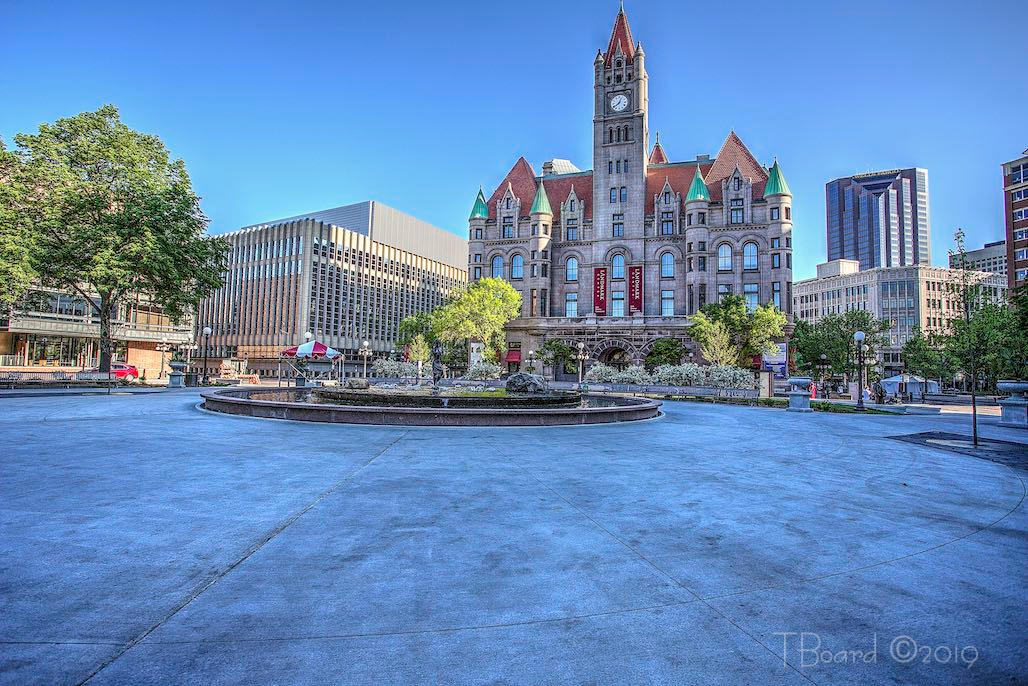 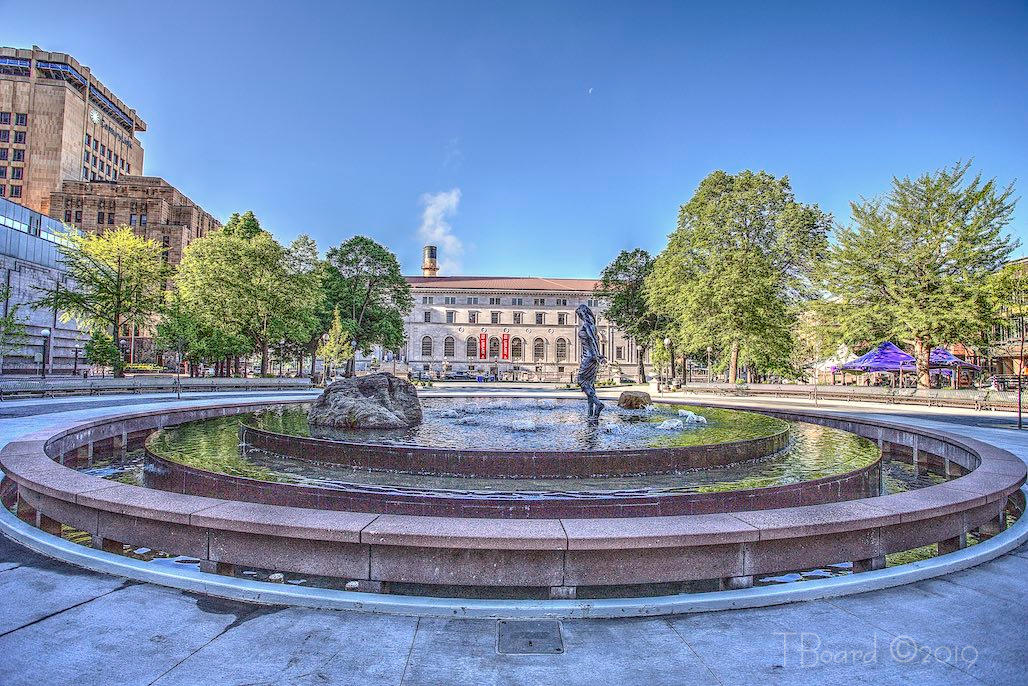 Looking toward the Library on the south end of the park 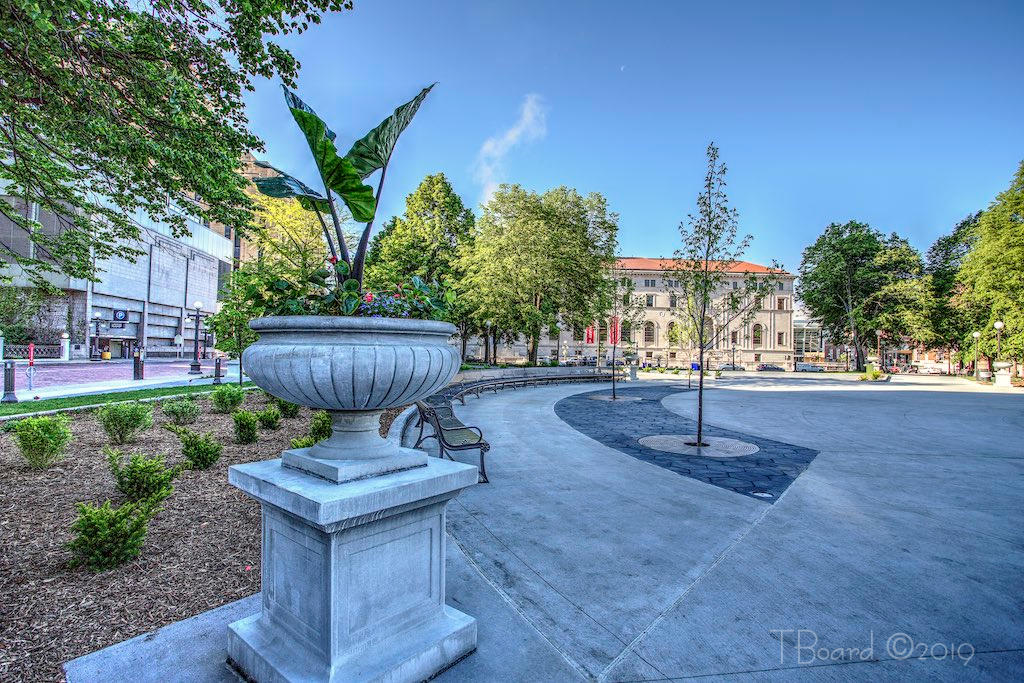 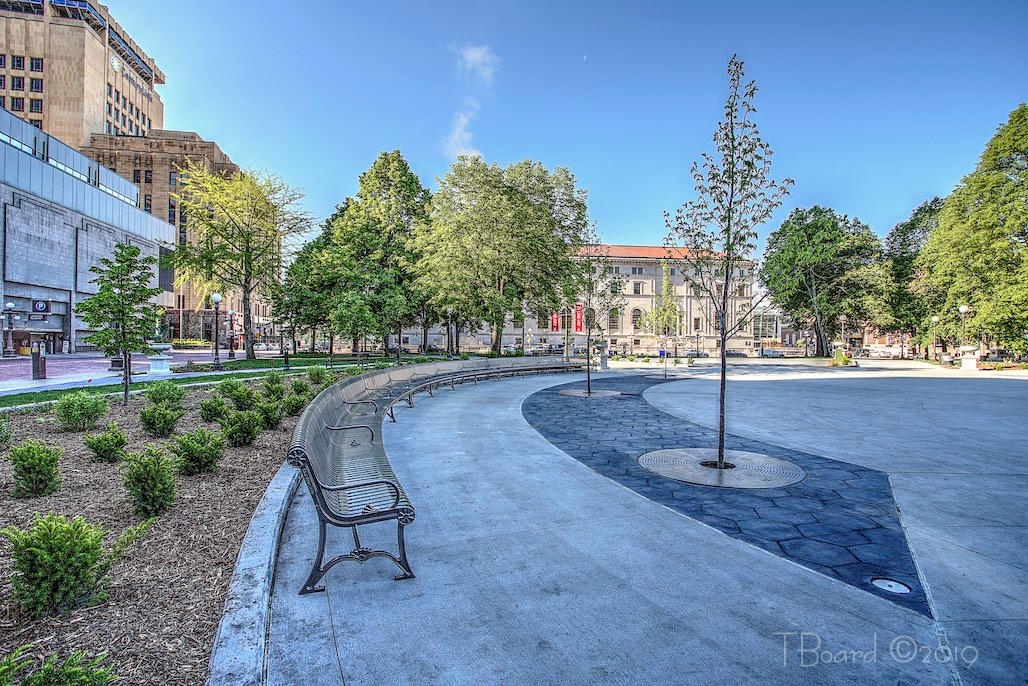 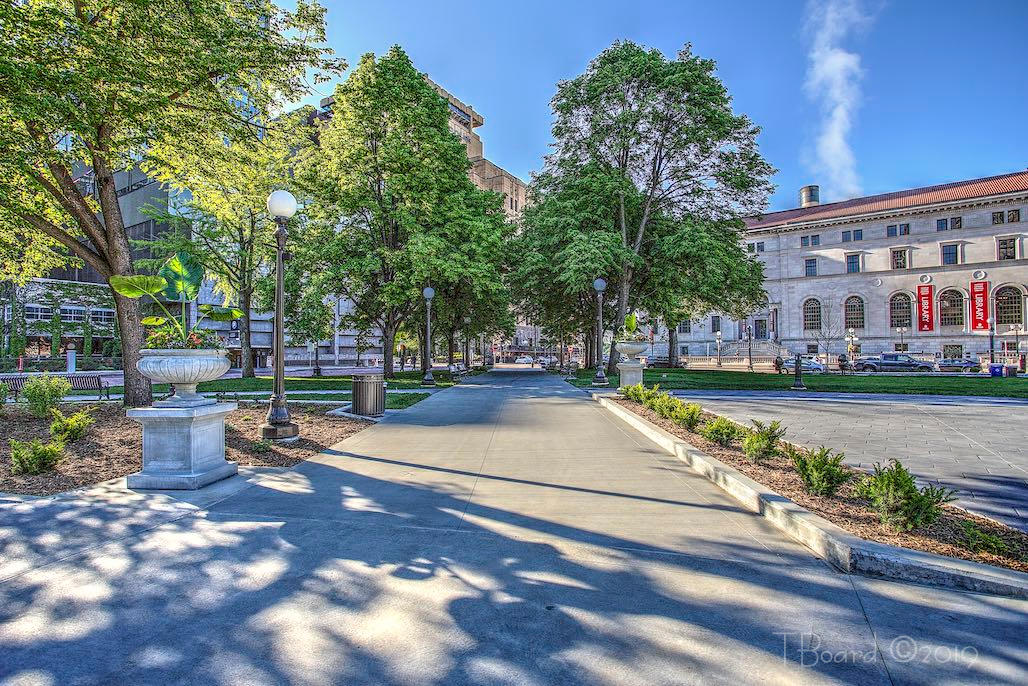 Part of the last design 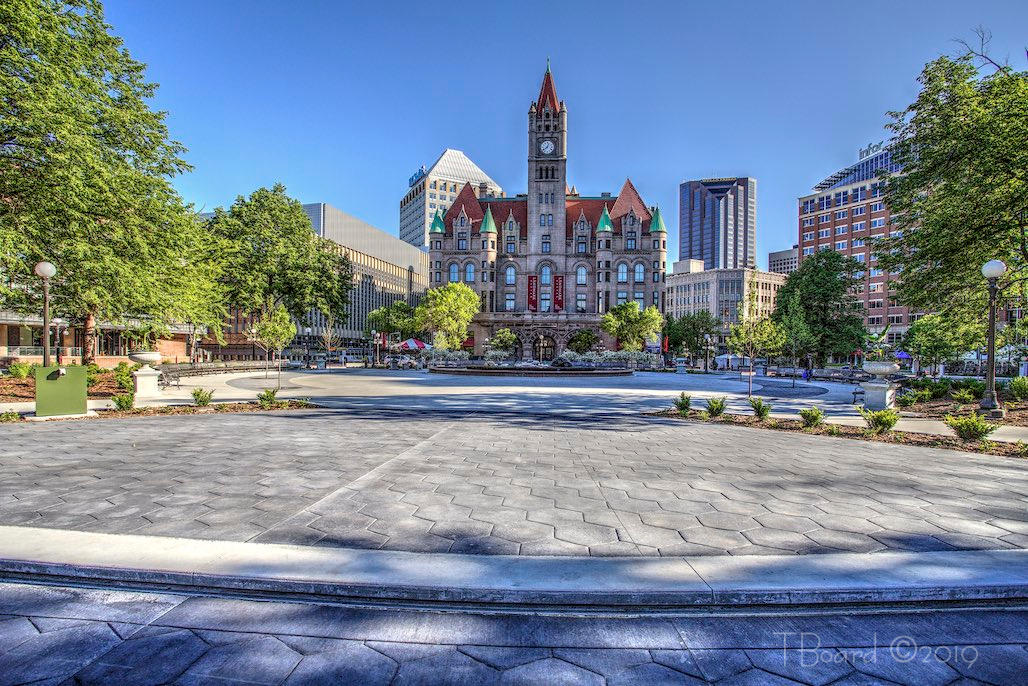 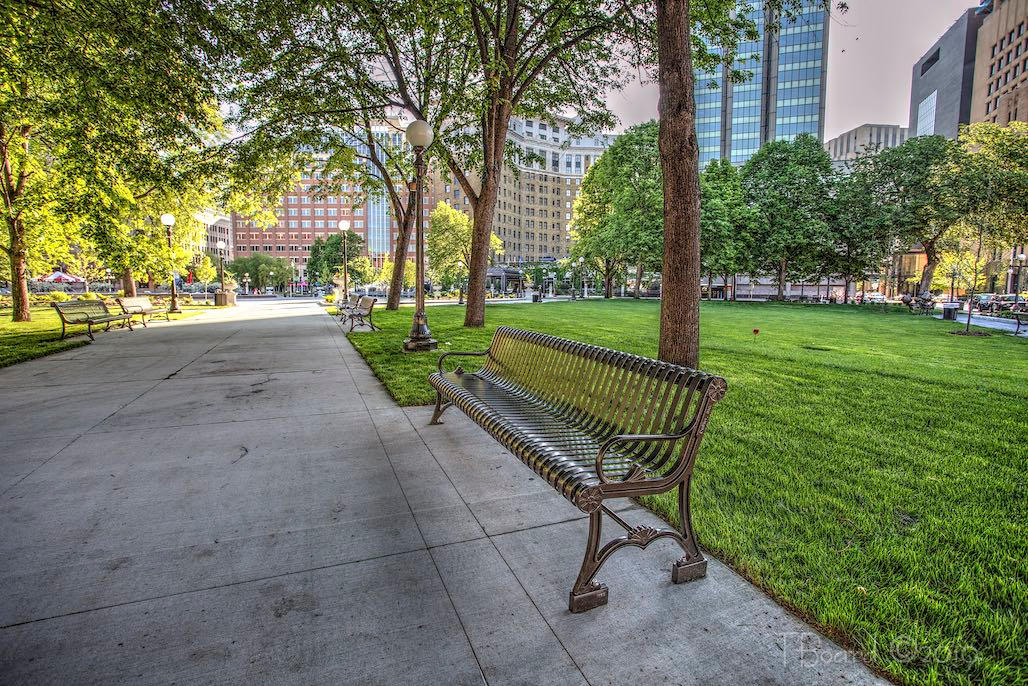 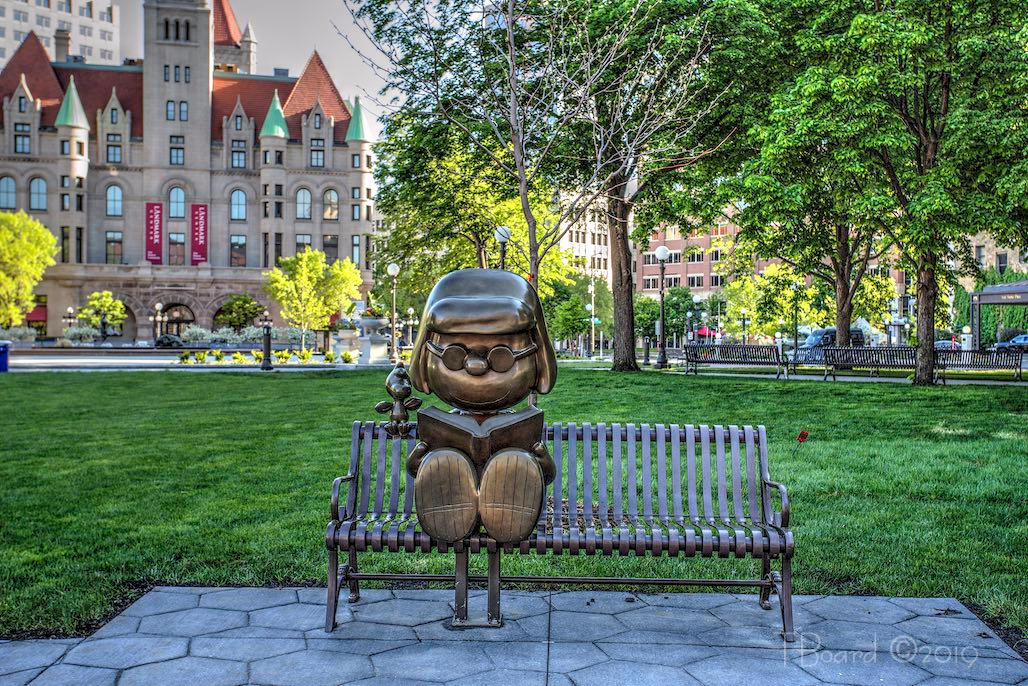 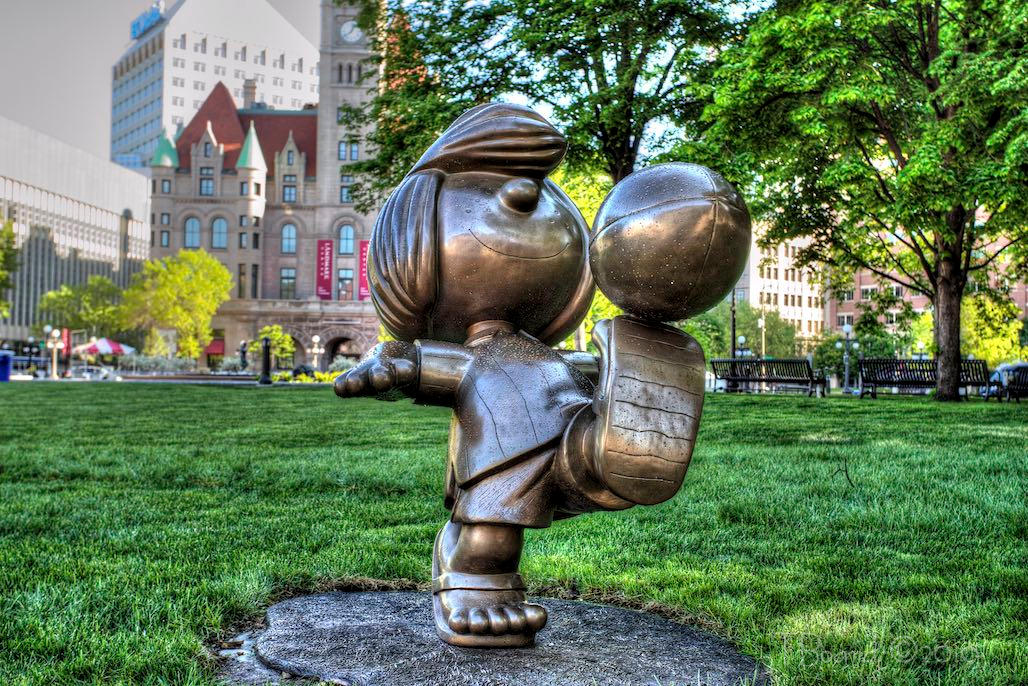 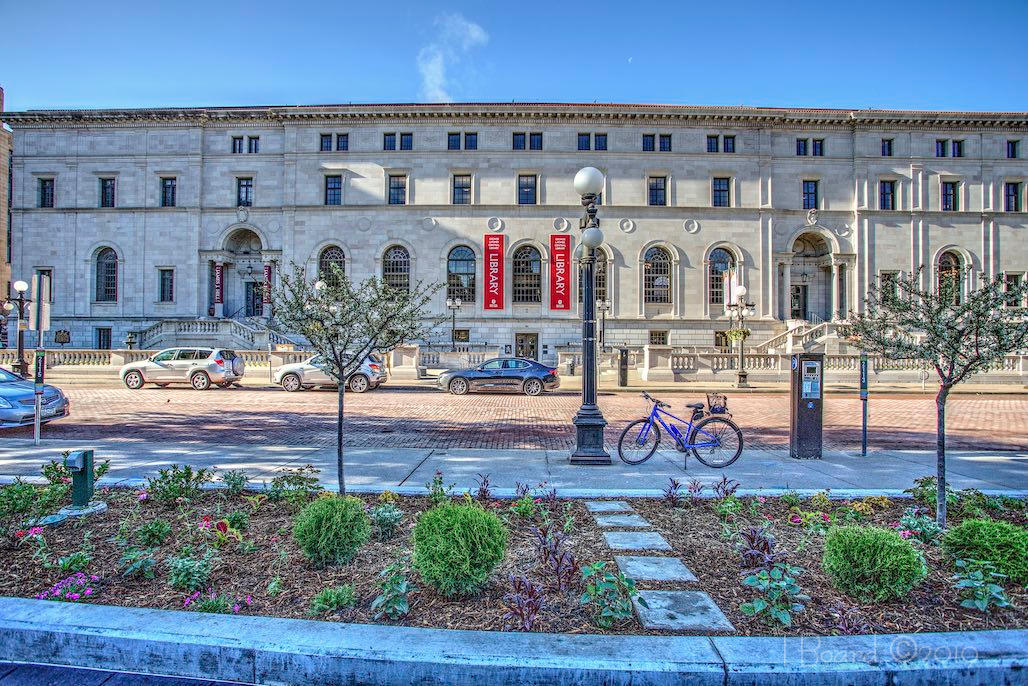 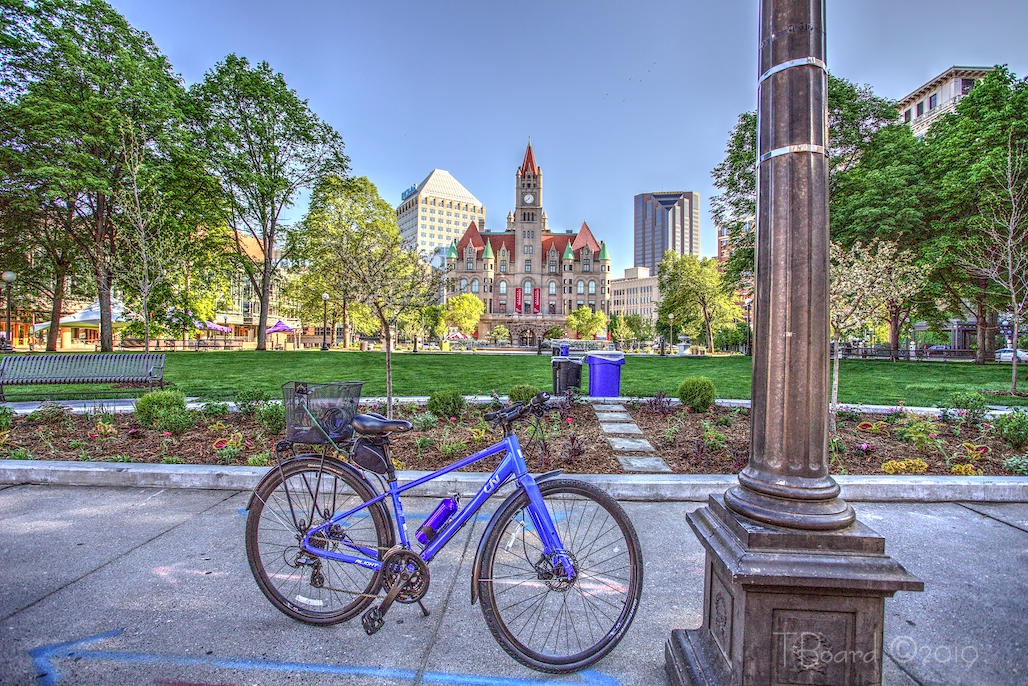 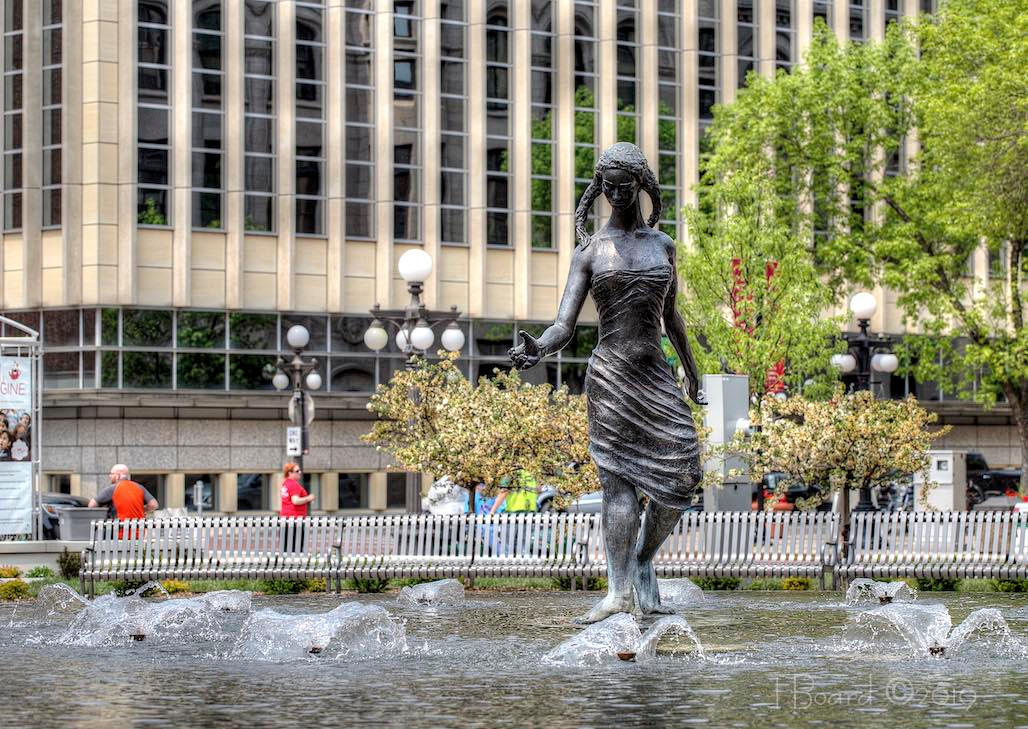 fountain by Wisconsin artist Alonzo Hauser, donated by the Women’s Institute of Saint Paul in 1965; referred to as The Source