I don’t think I have ever published a book review on this site before today. 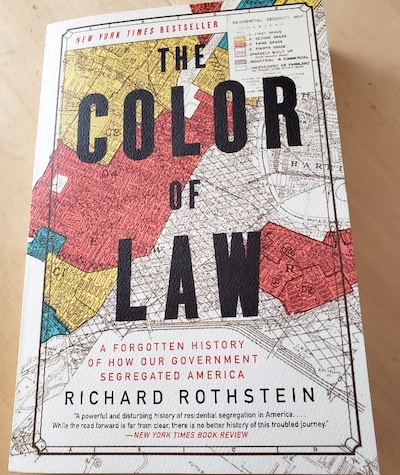 The book is “The Color Of Law” A forgotten history of how our government segregated America. by Richard Rothstein.

The book helped me understand how and why our neighborhoods are racially segregated, and they are segregated.

Rothstein give examples of how public housing helped segregate communities and how federal subsidies given to builders to create whites-only suburbs.

The houses in the suburbs that were built after WWll  were a hot new product and were sold as housing exclusively for white people.

It is clear from reading the book that segregation wasn’t an accident but that it was by design. Rothstein outlines how cities from coast to coast became segregated through State, Federal, and local policy and zoning laws.

He shows how housing was built near jobs and how African American workers were not allowed to own the housing and had to drive long distances to work in lower paying jobs because the best jobs were given to white people.

The FHA (Federal Housing Administration) promted the idea that if African Americans moved into a neighborhood property values would go down. I have heard similar retoric this year about affordable housing in the suburbs and how the suburbs need to be saved.

He makes an arguement in the book for reperations. After reading it I have to agree because the racial disparites we see today have deep roots.