When asked about the last decade in real estate my memories of the crash of the housing market more or less wipe out the rest of my memories.

If you ever wondered what happened with all those vacant registered houses, look around and you will notice vacant lots. They didn’t all get torn down, some were rehabbed, and a few are still vacant.

This is what I wrote the first week in December 2009: 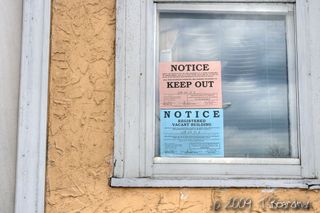 I don’t want to say good news, it is better news, at least for now.  In September of 2008, there were 2031 registered vacant buildings in St. Paul.  Most were homes. Now some fourteen months later the number has dropped to 1633.  That is still a big number and it doesn’t count all of the vacant homes just those that have to be registered with the city of St. Paul.   In most cases, those are buildings that are unoccupied for a year or unoccupied with code violations.

Having fewer vacant properties in St. Paul is a good thing. I drove by some that were on the list last summer and they have been fixed up and some have been sold to new owners. The home in the photo is on E. 3rd street and is looking much better and doesn’t have the notice in the window anymore. I will keep watching the list. I hope that it continues to go down.

The number of foreclosures on the market has gone down and continues to decline each month but should go back up again when the next wave of foreclosures hits.  These foreclosures will be caused by job loss and ARM (adjustable-rate mortgage) resets. According to reports from the Mortgages Bankers Association delinquencies on FHA and conventional mortgages have been rising and delinquency rates and foreclosure rates will continue to worsen before they improve.  I will go ahead and predict it will also drive up the number of vacant homes in St. Paul too.