Real estate is local.  Here are some numbers for the Month of November 2013.  We are experiencing the normal seasonal slowdown.  The median home prices went down slightly from the 144K we saw in  October 2013 to 142,500.  It is normal for home prices to go down a little toward the end of the year before they rise again in January.  Median home prices are up 12,000 from November 2012.

The numbers look similar to last years numbers as ar as how many homes are on the market and how many are selling.  November 2012 numbers were a little better.  the inventory of homes on the market is declining again but this time it isn’t because more homes are being bought but because fewer are going on the market.

Buyers are complaining about not having enough choices and some sellers are having a real hard time selling homes that are even slightly over priced.  Invesotrs are out and about making low offers hoping to score a bargain. 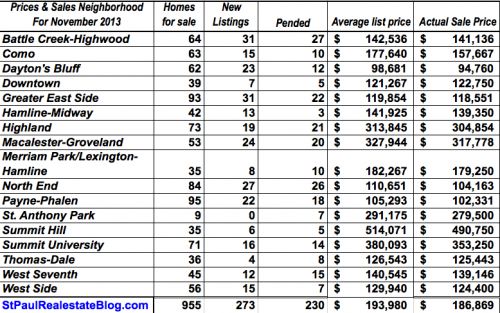 The numbers used to make these reports are taken from the Northstar MLS which is deemed reliable but not guaranteed.  No animals or human were harmed in the preparation of these numbers.