There have been many changes in the real estate industry over the last decade.  For the most part I have been ahead of my peers when it comes to adopting new technology but there is one exception.  Until last Tuesday I have used an “DisplayKEY” which uses a magic number to open electronic lock boxes. For many agents it was replaced by various apps for smart phones some time ago.  I resisted changing over because I thought the monthly fee they charged was ridiculous so I stubbornly hung onto my displayKEY, and I know for sure that I wasn’t the only Realtor to do so.

The monthly fee was just reduced by more than 60%, making it less expensive than the  displayKEY.

. . .  and yes it is a real convenience to be able to open lock boxes with my phone and to not have to register my DisplayKEY every day.  I have always used electronic lock boxes even though they are more expensive because they are better for security.  They can only be opened by a member of the local Realtor association and I can get a reading from the box to see who has opened it.  I would imagine that the big blue lock boxes are obsolete or soon will be. 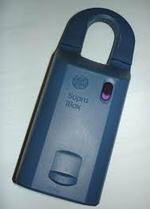 One Reply to “Saying goodbye to old technology”