It is Friday and Fridays are for fun and what could be more fun than a photo app for your phone?   There is a photography app for the iPhone that has been around awhile called Instagram.  I have been using it for a year or so but on an iPad because I don’t have an iPhone.

Instagram threatened to build an app for the Android for at least a year and the folks with iPhones got kind of obnoxious about it as they often do.  Finally the Android app was rolled out about two weeks ago. Some iPhone users did not like the idea.  . . Intagram was like this exclusive gated community and now they let just about anyone in. . .well they probably won’t ever let blackberry users in.

I have read that the Insagram app for the Android has already been downloaded five million times and of course Facebook just bought Instagram.  I like Instagram but it doesn’t seem all that special.  There are any number of ways I can use filters to make photos I took with my phone look interesting or even unidentifiable.

There are far easier ways to share photographs in fact instagram is pretty limited and was even more limited before they started offering an Android app and Facebook integration.   Don’t go looking for the instagram photo sharing site on the internet because you won’t find it, but they do have a decent blog with some wonderful photographs on it.

Here is a photo I took with the Instagram app.  Can you tell if I used an Android or an iPhone? 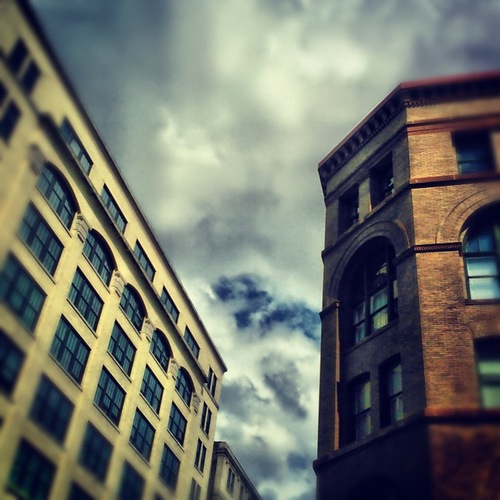 Taken in lowertown on 5th in S. Paul, MN

I have used the filters a few times with food.  I can take something really tasty and make it look inedible just by applying the right filter.