It could be the best water on the planet, we don't really know because no one has sampled it all and reported back.  The water is from a deep well, about 11,000 feet below the surface and taps into the immense and ancient Hinkley aquifer believed to have been created when the glaciers melted . . not the glaciers we had last winter but the old ones that were here before we were. 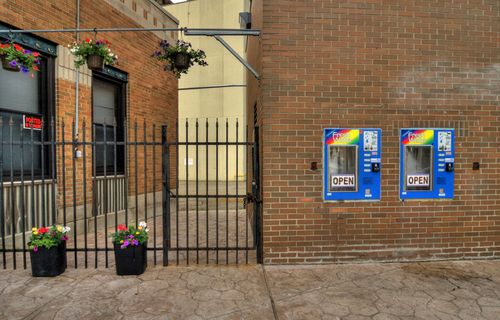 This water can be found at the old Schmidt Brewery which is easy to spot on West 7th Street near Jefferson. The well was drilled in 1885 and the water was used to make beer.  The brewery has a long history but has not produced beer since 2002.  The spigots on the outside of the building have been there for years but they have been turned on and off as the brewery was bought and sold and even used as an urban ethanol plant.  Right now they are on and a gallon of water will cost $.50 but starting on June 19th it will be free and thanks to a grant from the city the area even looks nice for the first time in my memory.

The walk is new and there are even flowers in front.   I used to get water every week and there was always a line on Sundays and we would take turns filling jugs.  It has been years since I have seen a line at the spigot.

This is the only well around that goes into the aquifer and laws were passed so that it can not be tapped into unless there is no other source of water. If you have never tasted the water try it.  There isn't anything like it around here and maybe not even on the planet.