It is Friday and Fridays are for fun . . once the work is done and  it never is.

I love my new iPad . . I guess there isn't such a thing as an old iPad yet so they are all new but mine is special because it is mine and I have an app that makes bubbles and it is the only electronic device I have ever owned that has not made me cry or even swear.  There are many articles about the device some are for geeks and others are for people like me who just want to use the darn thing and not think it to death or geek out over it.  I have kind of Zen attitude about it all.  It does what it does and that is what it is for.

There is one thing about it that the geeks are not writing about and that is that the finger print resistant screen is a finger print magnet. Worse than a stainless steel appliance.  Since it is a touch screen device there doesn't seem to be a work a round.  I have concluded that finger print resistance is futile and my beautiful iPad is usually a smudged up mess.

The first day I had it I did some research on how to clean it.  Apple has a line of cleaning products for it but I decided that they are ridiculously expensive and I am a rebel and a free spirit and resist the temptation to do what I am supposed to do or what everyone else is doing or what "they say" I should do.

I discovered that I can clean my iPad the same way I clean my cameras lenses.  If it has stuff all over it I give it a light dusting with my lens brush and then I use a micro-fiber cleaning cloth to remove the smudges that seem to be in the exact location of the on screen keyboard. The cloth is sold for cleaning eye glasses and can be found for less than two bucks at most drug stores right next to the reading glasses or in some stores sun glasses. 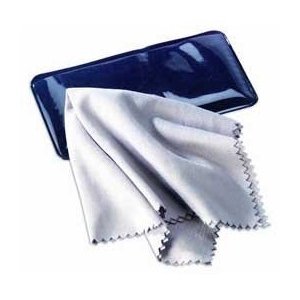 I was afraid the other kids would laugh at me last weekend when I was at Word Camp in Chicago and I took my grungy iPad out of it's case, which is a $14 net-book sleeve instead of a $69 iPad case, and then reached into my  backpack and pulled out my little cleaning cloth and made my iPad look all shiny and new.  I waited for the laughter but it didn't come, instead they used my cloth to clean their own iPads and asked me where they could buy their own cloth.

If you have ever been in an Apple store you will see a display of shiny new iPads that you can try out.  What you don't see is that when no one is looking one of the staff pulls out a rag and a can of "apple polish" and gives them all a good scrubbing.

As a bonus tip I will mention that iPad and fast food don't mix at all.  McDonald's may have free wifi but if you have ever seen an iPad after it has been used while eating at McDonald's you will understand why I like to leave mine in the car or if I bring it in I just have a cup of coffee with it.