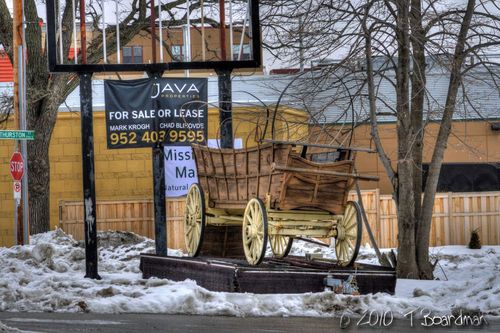 The covered wagon, which I should call the uncovered wagon is parked just off the street on West 7th street at Thurston right next the new Mississippi Market.  It has been parked there since 1853 when pioneers traveling to the West found what was to later become part of frontier St. Paul Minnesota and decided to stop.

It was on a Sunday and when they looked around they decided they wanted to live here. In those days what is now West 7th was called Fort Road and it went out to Fort Snelling which was the only settlement around. There were some houses here and there and no one heard of that new city Minneapolis because it wasn't invented yet.   They roamed around looking for open houses but there weren't any because there were no houses in the area.  They ended up building one.

No one knows for sure why they left their wagon or what happened to the cover, or the horses but it was parked before the parking ticket was invented and before we had all of those no parking signs so it was grandfathered into the system and is allowed to remain where it is.  It will remain there until the end of time.

4 Replies to “The legend of the covered wagon”