Three is the magic number.

I'm into threes. Trilogies, triumverates, the branches of the U.S. government, and Ménage à Trois (I'm talking about the wine, dirty birds!). I've taken liberties within these bloggy walls with a couple of triadic diatribes. One time I did the weather; another time I did sports.

This time, I piggyback my trilogy off the last two posts about the Twin Cities Marathon, written by Erik and Teresa, because I ran the marathon.

I made my first public proclamation last year on the St. Paul Real Estate Blog that I was going to run the marathon (see especially the last two paragraphs). I stuck to my word.

By today's standards, a marathon that packed up two days ago is unbearably ancient news, but bear with me because this is an enduring tale about community ahead of the usual marathony "emotional journey" blather. This was my second marathon, and I got my first-timer waxworks out of my system a few months ago while switchbacking my way through the final mile at Canal Park in Duluth, Minnesota.

For this jog, I was able to breathe in the twin towns, and I wanted to share a brief, along-the-path account of the external magic of running in the Twin Cities Marathon. It will make more sense if you know the route, so here. 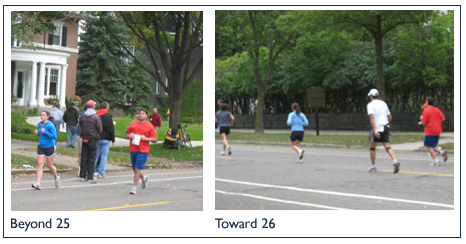 The clouds may have been a constant for this year's marathon, but Twin Cities, you shone brightly and made me proud to be living within your borders as I ran through your neighborhoods. It's an urban setting like few others, and I often take it for granted when I'm driving around in my car or walking around dodging other people's cars. It's a community best scene (sic) on a 26.2-mile hike with no traffic.

About that traffic: "With all the bitching about the traffic problems from the marathon, I think half the city is just happy to have the streets back," said T. Boardman in an email to G. Sax. 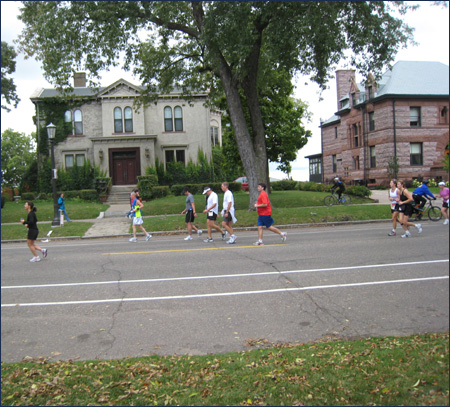 Case in point, as the wife and I were walking back up to Holly and Arundel from the Capitol toward our car, a younger gal pulled up in a sedan, took a drag from her cigarette, and asked, "Is there a way to get through here?" We said no. She said, "You're going to think I'm an idiot, but what's going on around here?" We told her. She shrugged and sped toward Dale Street.

Idiot? I'm the one who's having trouble walking today.

One Reply to “You're Almost There”