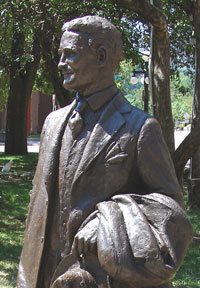 “Fitzgerald loved, hated, and was obsessed by St. Paul.”
– Charles Baxter, author and U of Minnesota Professor

F. Scott Fitzgerald is probably the best known of Saint Paul’s many favorite sons in the arts.  His fables chronicling the Jazz Age have been lauded by critics, readers, and English teachers throughout the world.  The most famous of these, “The Great Gatsby”, is often chosen as the greatest American novel.  What gave him this clear, concise voice of his time?

Deep inside of him, Fitzgerald was always a Saint Paulite. Born in 1896 into a middle class Irish family with a few old money roots, he was able to make his way to college “back East” at Princeton.  The taste of an upper class world of easy money hooked him hard, but he could not shake off his roots.

The feelings of inferiority that came from “being the poorest boy in a rich boy’s school” were never resolved by Fitzgerald, and probably led to his becoming an alcoholic.  Saint Paul was everything that was good and decent to him, but he always felt it had to be left behind.  His ability to see the flappers and the Jazz Age from a view inside yet apart comes from this terrible conflict.

When he was 24 he returned to Saint Paul with his wife Zelda, and began his writing career. Their relationship was difficult, at best, as Zelda’s developing schizophrenia played off of Scott’s incredible drinking habit.

In 1992, the city of Saint Paul first discussed putting up a statue of Fitzgerald in Rice Park (pictured above) A very old woman who was a neighbor on Portland Avenue as a young girl told the Pioneer Press of the late night drunken shouting matches between Scott and Zelda that woke her up.  True to Saint Paul fashion, Fitzgerald was only honored after this woman (and everyone that knew Scott and Zelda) had died.

Eventually, Scott hit it big with “The Great Gatsby”, and could afford to live in New York and Paris and wherever he saw fit.  He was restless when he was away from Saint Paul, and drank even harder. Never being able to duplicate the fame that “Gatsby” brought him, he died after his second heart attack in 1940 at the age of only 44.

Leaving Saint Paul was a big part of what made Fitzgerald immortal, but it ultimately used him up as a writer and killed him.  This was his home, and he made it clear to the world in the elegiac final chapter of “Gatsby:

“One of my most vivid memories is of coming back west from college at Christmas time.  … we caught the site of old acquaintances and the matchings of invitations: “Are you going to the Ordways’?  The Herseys’?  The Schultzes’?” and the long green tickets clasped firmly in gloved hands.  And last the murky yellow cars of the Chicago, Milwaukee and St. Paul railroad looking cheerful as Christmas itself on the tracks beside the gate.”

“I see now that this has been a story of the West after all – Tom and Gatsby, Daisy and Jordan and I, were all Westerners, and perhaps we all possessed some deficiency in common which made us subtly unadaptable to Eastern life.”