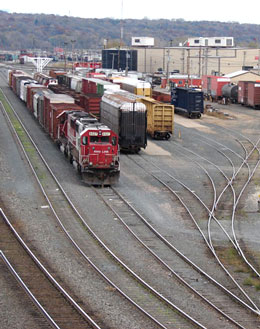 In Saint Paul, it’s pretty common to find yourself sitting at a railroad crossing waiting for the train to pass.  There’s nothing to do when this happens but watch the different cars pass by with all the different names of railroads across the nation.   If you’re lucky, you might see one of the engines with the faded red, white, and black of the Soo Line, the once proud railroad that made Minnesota proud.  It’s a tale of grit and determination, a maze of wholly owned subsidiaries and bankruptcies, and it’s a big part of what made Saint Paul what it is today.

It started in 1883 when WD Washburn, owner of the flour mill in Minneapolis, incorporated the line to ship his products out of the state.  It was a simple business move to own the route to distant markets in order to make the product worth more.  Grain and processed flour was what Minnesota was all about at the time, producing over 20 million bushels of it.  The Minneapolis, Sault Ste Marie and Atlantic Railroad was chartered to get it all through Wisconsin and into the Great Lakes.

The alternative was to move it all through Duluth, but that port was already establishing a monopoly on grain.  By getting it out as far as Michigan, it could then move to the east by other railroads.  It was a daring move, but by 1887 they connected with the Canadian Pacific and the Duluth South Shore at the top of the Upper Peninsula.  The line was also being pushed westward under the equally grand name Minneapolis and Pacific Railroad.  Much of this was consolidated into the Minneapolis, St Paul, and Sault Ste Marie Railroad in 1888.

Neither line made it anywhere near the oceans that were in the name, and along the line it was clear that the operation was always going to serve the grain belt of the upper Midwest.  It went from Minneapolis to Bismark and on to Winnipeg by 1903, and in 1913 reached Whitetail, Montana.  Another piece was operated as the Wisconsin Central to Chicago.  All of these pieces of track relied on connections to the Canadian Pacific to ultimately move everything east and west and ultimately to markets as far away as Europe and Asia.  It became known as the Soo Line, the phonetic pronunciation of “Sault”.

The 1930s was hard on the line, which was in bankruptcy from 1937 to 1942.  They decided to start using the nickname “Soo Line” as their official name, with MStP&SSMRR under the logo on the official stationary.  Soo Line just worked better.  The Wisconsin Central piece didn’t emerge from bankruptcy until 1954, and following that all the pieces were reorganized under the one name.  Many smaller lines, including the famous Milwaukee Road, were purchased by 1985 in an effort to make the big railroad they always wanted to be, but it was too late.

In 1992, the Canadian Pacific took full control of the Soo Line.  By 1997 it was operating as the CP, a true coast-to-coast operation going as far south as Chicago, with the distinctions in the US no longer needed because of NAFTA.  Today, the yard in Saint Paul that grew up as the main Soo Line center of operations is a CP hub, and all the traffic for this part of the line routes through there.  Their main line through all of this is called the “Short Line” through Saint Paul, defining the base of Crocus Hill.

It’s been a while since we had our own little railroad that could, but the Canadian Pacific is a class operation that keeps the trains and tracks in good shape.  Once in a while you’ll see an old one with the Soo logo on it, but they’re all being repainted.  Consider yourself lucky to see a bit of history in the middle of your drive.

One Reply to “Soo Line”