The Victoria Park project in St. Paul seems to be dead. It was to be the biggest single development project in St. Paul.  It took ten years to plan.  The site is what we call a brown field. It used to be owned by Koch Mobile.  For years huge fuel storage tanks stood on the site. They were removed and the land was cleaned up. They started building just about the time the real estate market had peaked.  If it had started two or three years sooner maybe it would have worked out. 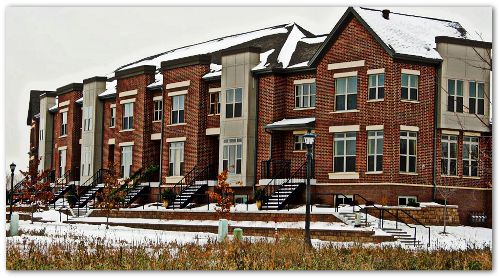 The townhouses in the picture are no longer for sale. They are being rented out and the rental rates are between 1800 and 2300 a month.  There is a sign out on the land advertising the availability of commercial lots.  The project would have been good for the neighborhood.  There are currently no plans to continue with the project.  There are new developments in the metro area that have been abandoned. Some have half completed homes sitting on lots.  Maybe some day we will need more new homes and someone will be able to build some but right now they just are not selling.  Was the Victoria Park project the wrong kind of housing?  Was it built in the wrong place or was it just bad timing?

6 Replies to “A missed opportunity”