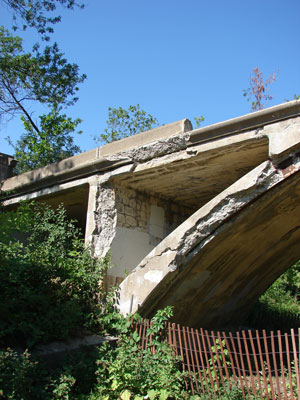 Away from the crowds of kids at the zoo, just beyond the lovers strolling around the lake, it stands overgrown with weeds and trees.  You have to want to find it, just below the mysterious stand of Catalpa trees that may be a memorial to the man who made it happen.  It is waiting for someone to care for it in a way that it used to be cared for, the grand entrance that once brought everyone into Como Park.

The pedestrian footbridge, also known as Bridge 5853, doesn’t serve any purpose any longer.  In 1904 people arrive in Como by streetcar, crossing the tracks from the “Waiting Room” known as the Streetcar Station over this simple arch.  From here, the whole park was theirs for the day, whether they came to see the Conservatory or have a picnic on Cozy Island.  Though the bridge was placed on the National Historical register, the lack of purpose has allowed it to go fallow and gradually fall apart.

Saint Paul is a city that loves its history, but sometimes we don’t know what to do with it.  The Streetcar Station itself has become a small classroom, open Sundays from Noon to 4:00, with interpretive and historic maps showing people what Como Park was built to be.  It all happened gradually, moving from a rustic open space to a recreational facility with golf, swimming, tennis, and nearly anything else you can name.  People started to arrive by car more than the streetcar, and eventually the trolleys stopped altogether.  There was no need for a single grand entrance, and there was no need for the footbridge. 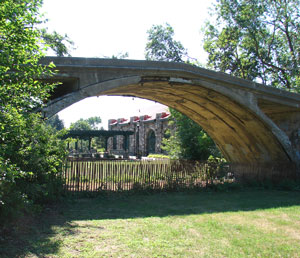 Lacking the funds or the interest to do anything with this overgrown grand entrance, it simply stands there, waiting a purpose.  When it was put on the Historic Register it was noted that it was one of the first reinforced concrete bridges of its type.  It’s a special structure for a lot of reasons, not just the many memories that started by crossing it.  Today, it has nothing to do, and the area underneath it is fenced off to prevent people from being hit by falling concrete.

What will happen to this bridge?  If we do nothing, it will eventually fall down.  So far, we’ve done nothing to it for over 50 years.  Though you have to make a special trip to the corner of Lexington and Horton just to see it, it’s worth seeing.  This is where Como Park became the great space that helps to make Saint Paul a great city to live and play.    It would be better if we found a way to restore it, but for now we have to be content with the overgrown sense of mystery that surrounds it.  It’s worth the excursion, just as the trip to Como was over this bridge 100 years ago.