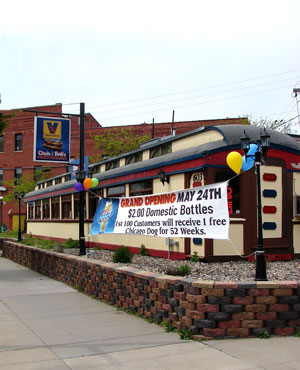 Memorial Day weekend is a time when a lot of people stay home and cook up a few hot dogs.  This year, however, the West End of Saint Paul has a different kind of hot dog homecoming.

Chris and Rob’s Chicago Taste Authority has been in operation in Minneapolis and Fridley for four years.  The brothers Dubnecay, who own and operate it themselves, have long proved that they lived up to their name.  Their specialty has always been a real Chicago-style hot dog, topped with peppers, relish, and everything you could want in a taste explosion that people develop an obsession for.  Their mission to bring Chicago specialties to a Minnesota audience also includes a great Sicilian style pizza that’s just doughy enough.  Chicagoans love their special food, and Chris and Rob do it with Authority.

When the old railcar restaurant at 603 West Seventh looked like it was going to be available, local real estate agent and part-time developer Dave Wickiser talked Chris and Rob into looking the place over.  They were impressed, and just yesterday celebrated the grand opening of their third location with a free dog a week to the first 100 customers.  Imagine great eats for free for a year, that’s something you expect only from family.

This is a great fit in the West End for many reasons.  Not only do they have excellent food, but Saint Paul has always been a bit closer to Chicago than Minneapolis in many ways.  The Chicago Northwestern Railroad made the connection simple and quick for many people, and frankly we’re just more of an Eastern town than Minneapolis is.  The West End and the old railcar seemed like a perfect fit.

People often say that they get lost driving around the West End because of the diagonal streets.  I tell them that you can’t get lost because if you keep driving you wind up back where you started; that’s different from being lost.  The story of the Dubecnay brothers and their family run operation took a strange turn of its own here in the West End. 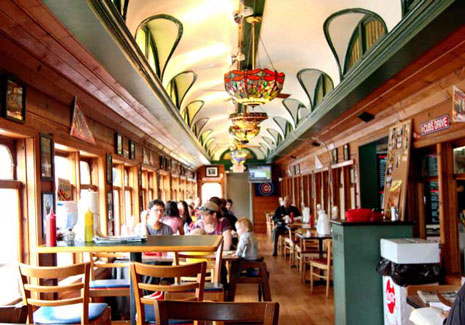 Just before opening, local historian Jim Sazevich did some research on the site.  It turns out that 70 years ago Anton Vesley had a shoe repair shop right there before the building was torn down to bring the old railcar in.  Anton Vesley was Chris and Rob’s grandfather, a man they never knew even lived in Saint Paul.  When Sazevich told Rob about this, eyewitness report that he stood there a moment not moving, with his mouth open; a final irony since his business is filling open mouths.

So is there a better way to celebrate Memorial Day weekend than a hot dog at home?  How about the most excellent Chicago style dog you’ve ever had, welcoming back home after two generations a few wayward sons of the West End?  At least they learned something incredibly tasty during that time spent not so very far away in Chicago that they could bring back to us.  But like any journey through the West End, we always wind up back where we started from.  That’s why it’s best to just call it home.

Welcome back, Chris and Rob, and thanks for bringing your genuine Chicago Taste Authority to the West End!