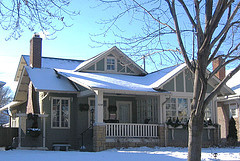 I usually don’t laugh while I drive. especially not when it is snowing, but two mornings in a row I have listened to part of a radio show on Ks95.  One of the announcers Mellisa Moore, wants to buy a home and she has some vary specific requirements.  She has narrowed her options to Blaine, Burnsville or Eagan.

People call into the show and talk about the neighborhoods and either recommend them or recommend against them.  It might not seem funny on the surface but the radio announcer wants a craftsman style home that was built in the 20’s.  That is when I start laughing, it cracks me up every time.

I can’t figure out why no one has picked up on it.   There are not very many craftsman style homes in the neighborhoods being discussed.  I pulled up the Eagan tax records and found 10 homes built in between 1920 and 1930 in all of Eagan, none are on the market.

Then I pulled up the tax records for Blaine 14 homes built between 1920 and 1930, 3 farms and some commercial property.  None are currently for sale.

In Burnsville I found 16 residential properties built between 1920-1930, and even found one for sale.  It won’t work for the radio announcer because it is a one bedroom and has less than 900 square feet of finished living space.  I did not check to see if any of the homes were craftsman style so my numbers could be off.  Craftsman style homes were also built in the 30’s and 40’s but Melissa specifically said 20’s so I went with that.  There could be certain characteristics that she is looking for that can be found in other housing styles.  She did mention hardwood floors.

Deciding which neighborhood to live in is a big decision and when she finally makes a decision she will not find the type of housing that she is interested in.   None of the callers mention that split levels are the most common types of homes in the areas being discussed.

Overall Melissa’s housing style and her neighborhood do not match, she will have to adjust one or the other to get what she wants.  I am not sure how much she is learning about neighborhoods.  Callers pretty much say they live in a great neighborhood, and she is only asking about a couple of neighborhoods each day.

I think she needs a good Realtor, I should stop laughing and start helping.  Craftsman style homes are the most plentiful in St. Paul and Minneapolis, which are both great places to live.   They can also be found in Roseville, South St. Paul, White Bear Lake, West St. Paul, and several other areas.

7 Replies to “Two days in a row, laughing in my car”