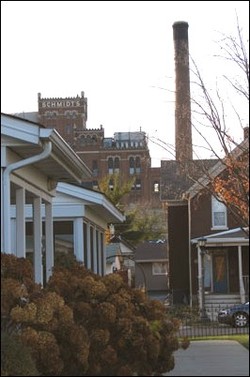 Neighborhoods in cities are subject to all kinds of pressures.  Sometimes a new highway causes them to be less desirable because of noise and traffic.  A new development that is out of character with the houses around it can leave a neighborhood lost and forlorn.  But the biggest problem is that older houses require constant re-investment, and if they don’t have loving care they simply become run down and forgotten.

This is the story of the Brewery neighborhood of the West End of Saint Paul, so called because it is tucked behind the old Schmidt Brewery.  The cycles of disinvestment and inappropriate re-use reached the point where intervention by the local Community Development Corporation (CDC) known as the Fort Road Federation was required to turn it around – and make the sorest problem of the community into one of the brightest highlights.

In 1995, the problem was obvious.  About a third of the brewery neighborhood was taken up by one large group home for mentally and developmentally disabled adults.  They were not an easy neighbor to live with, and gradually other houses around them became vacant and run by absentee landlords.  The plan that the Fort Road Federation came up with was bold, but absolutely necessary to save the neighborhood.

The master plan that was approved that year called for 30 houses to be rehabilitated and sold off.  Another 12 structures were demolished, and 6 were moved within the neighborhood to create open land to develop 22 new townhomes.  The group home was dispersed elsewhere in the city.  The total price tag was $9.2 million, a hefty sum raised from sources that included foundations, sales tax money, and other city sources.  The project was finished by 2000.

The Fort Road Federation’s role was to create the master plan, assemble all the financing, bring in the developers, and oversee the entire project.  It was no small task, but it had to be done.  Without a CDC to do these tasks, inner city redevelopment is almost certainly impossible.  The way that the Federation does this is to first engage local residents in the process and gain a large pool of support that steers the project through the maze of bureaucracy.  The coherent vision and heartfelt support is even more important than the mountain of small tasks keep the project moving forward. 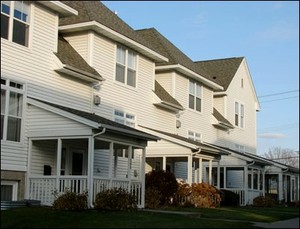 Today, the Brewery neighborhood is an attractive and stable place to live.  It becomes obvious how important this is to the West End when you see that the growth in property values has out-paced the city as a whole according to a recent study. By taking the most troubled neighborhood and investing in it so that it is one of the best, the entire community sees a benefit.

More importantly, the pride that the community realizes gives other homeowners the confidence that they need to make reinvestments in their older homes.  This is the best way to break the cycle of disinvestment that gradually brings down everyone else.  The immediate benefits are there for anyone to find, but the longer term benefits of avoiding a negative are realized more gradually over time.  The “Brewery Breakthrough”, as the whole project was known, was a terrific success for the West End.

CDCs do this kind of work in communities all across the US.  It is work that no one else is frankly able to do, and it is why we need organizations like this everywhere.  The pressures of the city are not so great that a group of citizens working together, strategically, can’t overcome them and make sure that their neighborhood remains a great place to live.