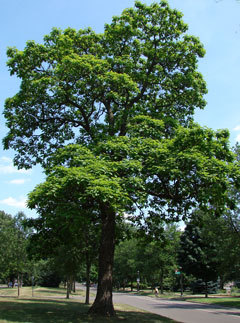 I  am hunting for a Catalpa tree. This should be easy, since they don’t exactly move – and there is one in my font yard. But this hunt isn’t just across Saint Paul, but across time.

The Northern Catalpa, Catalpa speciosa, is a scraggly tree that grows crooked and uneven. It looks as if it has been somewhere and is a bit wiser for the trip. The broad leaves hang down as though they are tired, but have an iridescent shine when the sun hits them. It drops branches thoughtlessly and has bean seed-pods that hang down from it, making it a dirty old tree to have around. It is considered undesirable for many reasons.

This was all noticed by the Catawba Indians of Upstate New York, where the Catalpa is native. To them, it has the wizened look of an old spirit and is regarded as sacred. When the fragrant orchid-like blossoms fall, it marks the Summer Solstice and a new season of life.

Many of the early pioneers of Minnesota came from Upstate New York. Some small number of them brought Catalpas with them to their new home. Possibly it was one “Johnny Catalpaseed” because these trees are so rare that they could be the work of one person. The reputation of the Catalpa means that they are almost certainly planted someone who has a connection to the pioneers. Replacement comes through those bean-pods, which easily take root – but only about fifty feet from the father tree. Those outside of a stand of several would have been planted on purpose by the first pioneers, to whom the Catalpa reminded them of home, and their children, to whom the Catalpa reminded them of their parents.

What I have been hunting are the stories that these trees silently tell us. My daughter recently 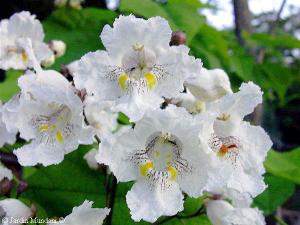 discovered a new story, a stand of Catalpas in Como Park, which brings my list of known Catalpas to this:
9 in Irvine Park, which was built by Pioneers and is the city’s oldest neighborhood.
3 in the median of Summit Avenue, just west of Lexington.
4 in the median of Summit Avenue, west of Fairview.
6 in Como Park.
2 single trees in two different locations.

As you can see, the find expanded our list of known Catalpas dramatically. But why are they so far away? Investigating the area, I noticed that they are at the end of Van Slyke Avenue, and that the oldest was about 100 years old. Who was Van Slyke? He came to Saint Paul from Cooperstown, New York, in 1854,  worked his way up to being a prominent businessman and, in 1882, City Council Member. He was the first Commissioner of the Parks in 1889, and he died in 1910. The street was renamed for him after his death.  Was a Catalpa planted at the end of it, also in his memory?

The most remarkable thing about Van Slyke is that the Parks Commissioner he would have been responsible for the median on Summit Avenue. He did live for a time in Irvine Park, as so many pioneers did, and appears to have been friends with Charles Spencer (whose boyhood home and my current home has three Catalpas in the yard).

I believe I may have found the “Johnny Catalpaseed” who brought these arboreal spirits to Saint Paul 150 years ago. William Alonzo Van Slyke may be the man who lives on through a small number of trees planted through our city.  But wherever the stories of the Catalpas take us, there is one thing that is clear. Catalpa trees are nothing less than the last living reminder of the pioneers who came up here on steamboats and settled on the banks of the Mississippi. That is what makes these hearty few the soul of Saint Paul.