The history of shenanigans in Saint Paul includes more than just the usual sleaze. As the capitol of the state, the legislature is another way that we can make our own fun. And they certainly do their part.

There are many strange stories that come from Capitol Hill, but some of the most interesting include the Capitol itself. Twice it has nearly been taken away from us, but each time events conspired to save it. 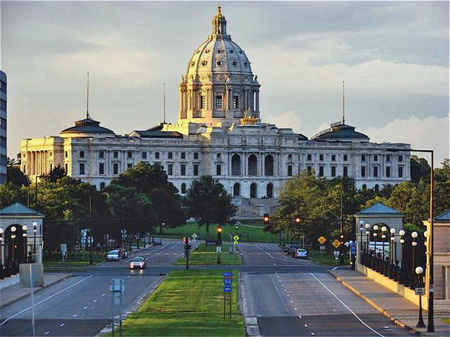 The first time was in 1857, before Minnesota was even a state. The Territorial Legislature governed an area that included Minnesota and the eastern part of the Dakotas. It was a wild place that was developing rapidly, and nearly everything was up for grabs.

The town of Saint Peter was being laid out along the Minnesota River in the fertile land that would later give us the Jolly Green Giant. The streets of this frontier town were wide and grand because they had a bold idea – they would become the capitol. All they needed was for the legislature to ratify it, and they’d be set.

The bill to make it all so and move the capitol was proceeding to a vote. But Joe Rolette of Pembina, now in North Dakota, did not like the idea of moving the capitol further south. He took the only copy of the bill, slipped it into his coat, and left the building. For days the police searched for him, but he could not be found. Rumors have him playing cards in the Minnesota Club, so perhaps they were not looking all that hard. When the session ended, the bill had not actually passed. Saint Paul remained the capitol.

The second attempt was a bit more organized. The first Capitol burned in 1881, and the Senate narrowly escaped death. A second capitol opened just one year later, but it was immediately found to be inadequate. By 1893, they determined it was time to build a decent one.

William Merriam’s term as governor had just ended, but he had been pushing for a grand new capitol all through it. He wanted it to be located between the downtowns of Saint Paul and Minneapolis in order to form the center where the two cities would merge He proposed a grand 20 acre site be used, opposite a new Cathedral that Archbishop John Ireland had committed to, with a broad park between them. The location was in Merriam Park, a part of town that happened to be owned by his Dad, Colonel John Merriam.

The whole scheme hinged on several different things, but the most important was the development that was planned on a grand scale. Think of it as the Bridges of its day. The details can be hard to tease out, since it has all become the stuff of local legends, but we know that in 1893 the location of the Capitol was up for grabs. How was the Legislature going to decide?

It turned out to be an easy decision. The first time Saint Paul was saved it was by a poker player, but the second was by a different kind of gambling. The Panic of 1893 started during the Legislative session, and rumors began to spread about the possibility of the whole Merriam Park plan folding up. Archbishop John Ireland tried to help move things along by laying the cornerstone of his cathedral, but it was no use. The Legislature picked downtown Saint Paul as its home. They were not taking a risk on Merriam.

The Cathedral John Ireland wanted to build as a symbol of unity among all the Catholics of Saint Paul was eventually built just opposite the new Capitol in 1907. The cornerstone that was laid in Merriam Park still stands in Town and Country Club. Joe Rolette had Rolette County, North Dakota named for him.

The Capitol was eventually designed by Cass Gilbert, and is the symbol and center of our city. It was opened in 1905 and still houses the Legislature from January until May, providing both laws and entertainment for us all.

Erik Hare is a writer who lives in the Saintly City