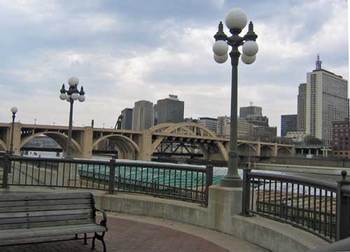 St. Paul is a wonderful town. It is put together in solid blocks of honest brick and stone, and has the air of intending to stay.

That is the Saint Paul we all know and love, and some parts of it haven’t changed too much since Mark Twain visited in 1882. But no matter how many bricks were mortared together on top of it, our slightly more dubious history is still deep in the Mississippi muck. I’ll let Twain explain it again:

How solemn and beautiful is the thought, that the earliest pioneer of civilization, the van-leader of civilization, is never the steamboat, never the railroad, never the newspaper, never the Sabbath-school, never the missionary–but always whiskey! … This great van-leader arrived upon the ground which St. Paul now occupies, in June 1837.  Yes, at that date, Pierre Parrant, a Canadian, built the first cabin, uncorked his jug, and began to sell whiskey to the Indians. The result is before us.

Take it all back a few more years to 1820. At the end of the War of 1812, Congress realized that if the British had bothered to march into the land that is now Minnesota it would have been theirs without a shot. After all, there wasn’t anyone there except the natives who’d been there forever, and what did they care? So they sent Josiah Snelling out to build a fort as far up the Mississippi as he could. The spot he chose, where the muddy Minnesota river joins up, was a high bluff perfectly situated for hunkering down – and many miles from anything.

Soon, the fort attracted the usual merchants and hangers-on in the reservation around it. One of them was a voyageur named Pierre Parrant, better known as “Pig’s Eye” because one eye was knocked still and blind, probably from a bar fight.  Naturally, there were rules for living on the military reservation around the fort, and Parrant was not known for following them. He quickly became known as a bootlegger who gladly sold to anyone with cash – including natives, which was especially frowned upon. 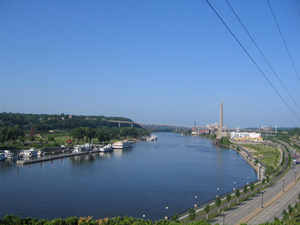 Thus Parrant was unceremoniously kicked out. He settled downriver just outside the fort’s boundaries in beautiful Fountain Cave, which gave shelter with little work and a natural stream of cool, bubbling water. A settlement grew up around his bar, and by 1839 Joseph Brown listed his return address as “Pig’s Eye”. A town was born.

When Father Lucien Galtier arrived in 1841, he was appalled by many things. Pig’s Eye was a rough and tumble frontier town that hardly could be considered “Christian”. The good father convinced the people to set up a church, a school, and most importantly to change the name of their town to a much more proper “Saint Paul”.

In other words, we became what we are now through the direct intercession of the Catholic Church.

We still have our moments, of course. Galtier’s “Saintly City” is more of a legend than a reality. But it’s no match for Pig’s Eye, which among legends has the advantage of being both true and duly chronicled by Mark Twain.

The city went on to be a capitol and all the wonderful things Twain said about it. Fountain Cave was bulldozed to make Shepard Road in 1962. Galtier’s name was used for a questionable real estate development. But the final word belongs to Pig’s Eye Parrant, whose name was used for a beer brewed for a while just a few hundred yards from Fountain Cave, ensuring that he survives in both the hearts and livers of Saint Paulites today. He wouldn’t want it any other way.