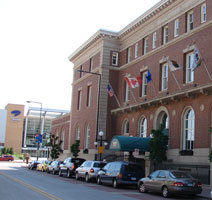 Nina Clifford is as well known in Saint Paul today as when she lived, a century ago. That’s not bad for a madam of a one of the largest brothels in town.

This is the second on what has become a series of pieces on the colorful history of Saint Paul. The word “colorful” is used to describe the bright lights of sin and sleaze faded by passage into history. That’s not to say that Saint Paul isn’t an upstanding and proper town, but we have always stressed the great virtue of honesty. I think it may be our Irish or French-Canadian heritage that leads us to easily say, “Father, forgive me, for I have sinned”. That may also be why my first piece on Pig’s Eye Parrant was so popular.

Nina Clifford (pronounced NINE-ah in Saint Paul, for reasons we do not know) is a woman shrouded in mystery. She was born after 1860 as Hannah Steinbrecher, possibly in Canada. She came to Saint Paul in the 1880s, and purchased two lots in the infamous Washington Street neighborhood in 1887. By 1900, the census listed 39 women living there.

Washington Street was a tough place. Located near the docks of the Upper Landing of the Mississippi, it was like just about any harbor anywhere. The most infamous landmark was the Bucket of Blood Saloon on Washington and Eagle, which apparently earned its cartoonish name. The rest of Washington was lined with brothels, completely uninhibited by the fact that their trade was illegal. It was assumed that the police took their, um, cut.

Nina’s brothel was as unique as the neighborhood she lived in. While Washington Street was near the docks, it was also sandwiched between the fine and proper downtown and the stately Irvine Park neighborhood. The jarring transition was made easier by the line of the bluff, which separated the brothels from downtown by about 30 vertical feet, and by having the more “respectable” brothel run by Nina on the edge.

Legend has it that the Minnesota Club (pictured), a fine gentleman’s club where the city fathers met to conduct business in a world apart, had a tunnel to Nina’s. No evidence has ever been found to prove this, and it is a solid 200 feet. But legend is more powerful than truth, and frankly in Saint Paul we don’t sweat those details. Certainly, Nina’s had its share of sophisticated customers.

Larry Hodgson was a journalist, city staffer, and eventually Mayor of Saint Paul from 1918-22 and 1926-30. When Nina was long gone and her property torn down to build a new morgue in 1937, he wrote a sad eulogy under his pen name “Larry Ho” (some jokes just write themselves) that has been heavily edited to keep this blog PG:

“No longer do gay lights their welcome convey
Inviting the wayfarer in
To choose from the bevy, his favorite lay
To dally a while and sin.”

Nina Clifford died in 1929, and the city did do it’s best to hide her story. But it was not to be. In 1980, local playwright Lance Belville wrote a musical about Nina and her brothel, called “Nina! Madam to a Saintly City” for the Great North American History Theatre. The wildly popular play centered on the hypocrisy of a city that tried to be so proper while at the same time patronizing Nina. As one song went,

“Lunch in the morning with the girl next door,
Tea in the evening with my ten dollar whore.”

This marks the start of the big Nina Clifford revival. In 1997, an excavation of the site to make room for the Science Museum of Minnesota (background of picture) captivated the city as each artifact was brought out. Nina’s coffee shop is also named after the famous madam as well.

Today, there is nothing left of the Washington Street neighborhood, and there is a parking garage over most of it. The Minnesota Club is now the headquarters of the Minnesota Wild NHL team, which might need a new old twist on “Wild”.

7 Replies to “Madam to a Saintly City”