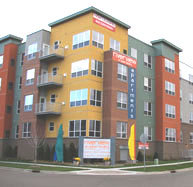 Rarely do we get a chance to see the opposite end of the value of community, which is what happens when there is absolutely nothing related to at all.  The development at the Upper Landing of Saint Paul shows that without any kind of community, success is bound to be elusive.

The Riverview apartments at 400 Spring Street are the best possibly example.  Finished in 2005, the 434 rental units have just about every amenity you can name – a great view of the Mississippi, access to downtown, indoor parking, a gym, and an “executive business center”.   What could possibly be wrong with this?

Well, plenty.  They are isolated, on an island cut apart from the rest of the street grid.  While many people also don’t like the design and colors of these units, what is most remarkable about them is how far they are from anything else, separated by a 50 foot tall bluff over most of their length.

How much could that matter in these days of cars and other ways of connecting?  We can’t say for sure what the rental rate is, but the rumor was that this summer, one year after opening, it was only one third full.  What we do know is that they were offering 3 months of free rent for anyone who signed a lease.  All of that after lowering the rent several times with apparently nowhere near enough takers.

This was anticipated, of course.  The planners who thought this was a great development were constantly told by the residents that isolation would be a problem.  But no one was willing to listen.  And now, we have an excellent counter-example of what happens when there is no community at all.

I happen to be following this very closely, as I am always concerned that this will become a “problem property” someday.  I can’t see how they will be able to keep up the investments they made to create a community out of whole cloth, rather than plug into what was already around them.  When that falls apart, we can only assume it won’t be pretty.

Already, I think this stands as a great object lesson that REALTORS already know, but planners and developers don’t always seem to appreciate when approaching the tall order of large developments.  It’s the community, stupid.

2 Replies to “It's the Community, Stupid”